Beginnings of the Rolex Submariner 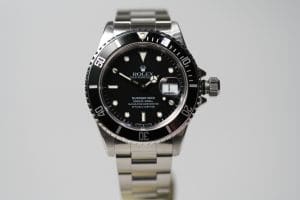 Despite the admiration of the Rolex Submariner story, The Submariner was not the first water-resistant watch Rolex crafted. The Rolex Submariner’s backstory goes even further to the 1930s when Panerai produced a ‘tool watch’, a 47mm cushion-shaped Oyster case watch. This was fitted with a pocket watch movement set up an affiliation with Panerai, who, at the time, were specialists in diving equipment. The Submariner that we know today hasn’t changed enormously since its release at the Basel watch fair in 1954. It has gone on to become become not only one of the most iconic timepieces in the world but also one of the most desired emulated. Between 1953 1954, three different versions were produced, the 6200, 6204 & 6205 these all differed slightly.

First came the 6200 ‘Big Crown’ only a small number of these submariners were produced. The 6200 had a thicker case in comparison to the 6204 & 6205 models. It also came with a larger winding crown was marked ‘Brevet’ this is derived from the French word brevette meaning Patented. The 6200 was made with an explorer-type dial, pencil-shaped luminous hands a ‘lollipop’ second hand. These explorer dials also featured an equilateral triangle at 12 o’clock, were as later models would go on to have a more elongated triangle. Earlier versions didn’t have the word Submariner or any depth indication printed on the dial, although the watch had been tested & depth rated to 200 meters

The 6204 was also produced in 1953 had slight differences in the dial crown. It was the first of all the models to display Submariner in small print on the dial this version also has a larger gap between the words oyster & perpetual had a more elongated crown in comparison to the 6200. The crown was smaller displayed a Swiss cross instead of the former ‘brevette’. In 1954 the 6204 was re-launched they made the submariner logo larger, was issued to the British Royal Navy.

END_OF_DOCUMENT_TOKEN_TO_BE_REPLACED

END_OF_DOCUMENT_TOKEN_TO_BE_REPLACED
We use cookies to personalise content and ads, to provide social media features and to analyse our traffic. We also share information about your use of our site with our social media, advertising and analytics partners.AcceptPrivacy Policy